– Any electric powered sailplane meeting the definition of an electric powered glider is permitted to fly in this event. – Launches will be accomplished by the competitor’s on-board electric power system and will begin within a starting launch window.

– The launching motor run will be limited by a 30second timer or 200meter launch altitude, whichever comes first. (A list of acceptable altimeter/timer switches is attached). – The launch must be followed by pure gliding flight with no further motor assistance. – Landing points will be added to the normalized flight score to determine the overall score

Thermal Duration Task – The task consists of a target time announced by the Contest Director (CD). 10 minutes is recommended. The CD may choose to change the target time based on local conditions, – The flight is initiated with a 10 second launch buzzer. All pilots must launch their planes within the 10 second launch buzzer. A plane launched before or after the launch buzzer will receive 0 points for the round. – Time will start when the model aircraft has left the hands of the competitor or helper. The model aircraft must leave the hands of the competitor or helper under the pull of the electric drive motor. -The CD may allow a power-off launch for reasons of safety. – No wing tip launches are allowed (discus, side-arm, etc.). – At the end of the motor run (30 seconds or 200 meters whichever comes first), no other activation of the motor is permitted for the remainder of the flight.

– Time will end when the model touches the ground or any ground-based object. – The flight will be scored at 1 point/second for each second up to and including the target time.

A Gremlin is an inexpensive flying wing design with foam wings and a fuselage made from a piece of downspout. 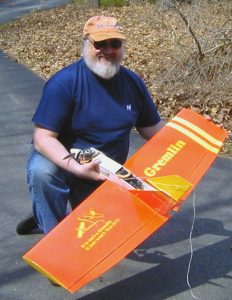 Sky Raider Mach II is an ARF (almost ready to fly) sold by World Models Inc. and available at Remote Control Hobbies and other hobby shops. 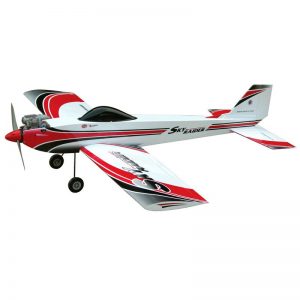 Pylon Races are meant to simple and fun. The aircraft are unmodified as supplied from the manufactures and a limited number of engines are allowed in both classes. The engines are basically .40 cubic inches with bushed crank (with the exception of the Evolution .40 which has ball bearings, but performance is similar to other engines in this class). Most common engines are OS LA 40 and 40 FP, Super Tiger GP-42 and other older engines.

The race consists of launch, climb to altitude and await count down to start. Participants cross starting line at start command and race the prescribed number of laps around two pylons, positioned in the overfly area. The winner shall be the aircraft that passes over the start/finish line first.

The CD for the Sky Raider race has published the following rules:

1. Only the Sky Raider Mach II will be used for racing.

2. The sky Raider Mach II will be used as it comes in the kit.

3. Spinners or the Dubro prop nuts can be used.

5. Stock motors with the stock muffler will be used. The only muffler modification allowed is the baffle can be removed from the muffler.

7. Since we have several Sky Raiders of the same color think about using trim colors on the wing so we can tell them apart. Post which trim colors you will be using on the reflector.